When you get molly fish, all you want is a colorful and vivid aquarium where the molly fish can swim about all the time. However, life is not all rainbows and sparkles. Your mollies will not always be swimming happily on the tank surface. To be honest, you might not locate them for days. But why would these small molly fish suddenly go into hiding? Is it something to be concerned about?

Molly fish generally hide in tanks with aggressive tank mates such as bettas and barbs. However, this also occurs when water conditions are bad, such as pH, ammonia, and toxins. Mollies will also hide in congested tanks or when they have a bacterial infection.

Aside from that, there are numerous other reasons why Molly fish hide. And in this post, we’ll talk about Molly fish’s hiding habits and how to stop them.

Why Do Mollies Hide?

Before we continue, it is important to realize that it is normal for mollies to hide. Mollies live in rivers, streams, and wetlands that are densely forested with aquatic plants. To avoid predators, they use the plants as cover and have been found hiding behind floating foliage.

To keep a molly fish happy, its natural environment must be replicated in the aquarium. This includes things like bushy plants, flowerpots, PVC piping, and ornaments like sunken ships, driftwood, and rocks.

Mollies are vulnerable fish that can die if they are moved to a new tank. Furthermore, the bio-load in the water will be different from what your Molly fish was used to in its natural environment.

As a result, it may cause serious health problems for this species. Molly fish dislike abrupt changes and will avoid any new environment. 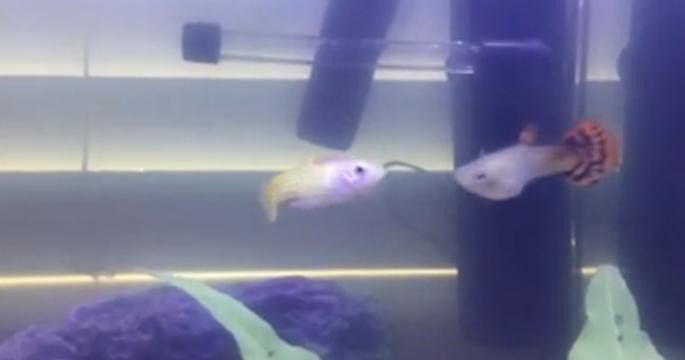 As a result, it is critical to introduce them gradually into your tank or to introduce a large number of mollies after a week of acclimatization.

If you must give Molly fish a home, remove all of the mollies after three days.

Mollies are calm fish that should be paired with similarly calm fish. They are incompatible with bettas (too territorial) and barbs (too aggressive). They will nip at your molly’s fins, making life difficult and eventually forcing it to hide.

When it comes to bullies, some fish will stop eating completely. Because of the presence of the dominant fish, they are too afraid to leave their hiding place during meal times.

They are terrified probably of something in their aquarium, which could be an item or another fish that has intruded on their territory. As a result, they hide all day and avoid the aggressor as much as possible until it leaves.

Small fish may become uneasy in strong currents caused by a new filter, oxygenator, or bubbler and may begin hiding to avoid unsettling water movements. Adjusting the currents can make these fish feel more at ease, allowing them to explore the entire tank once more.

When fish become ill, they may seek out hiding places to conceal their vulnerability from potential predators and bullies. If a fish suddenly begins to hide, it is best to get a good look at it and note its eating and other behavioral habits to ensure that the entire community does not become infected.

A small tank with a lot of fish will drive your mollies underground. Overcrowding is harmful to all fish. It almost always results in stress. Overcrowding causes larger and more powerful fish to become more aggressive. Some species will even kill their tankmates to secure the tank’s limited resources. To avoid the aggression displayed by their neighbors, peaceful fish such as mollies will become timider and go into hiding.

How to Keep Your Mollies From Hiding?

As previously stated, some mollies will hide because they are new to a tank (or because you have introduced new fish to their tank). In such cases, you must give them time to adjust to their new surroundings.

They will become comfortable enough to swim in open water after a few days. Do everything you can to make the new tank appealing. This includes avoiding overly bright lighting and maintaining optimal water conditions.

Another method is to keep the new fish in the carrying bag inside the tank for a few hours. It will be able to comprehend its surroundings without being subjected to direct stress in this manner.

Keeping your fish in this manner will also solve the problem of temperature differences. Frequently, the bag in which the fish were purchased is colder or warmer than the tank itself. We achieve a gradual equilibrium by placing the bag within the tank.

Examine your molly fish carefully to see if it is sick or injured. If you notice any concerning symptoms, such as loss of appetite, lethargy, or bruising, move the fish to a separate tank and begin treatment. When the fish is healthy, it can be returned to the main aquarium.

Before adding new fish to your molly fish aquarium, quarantine them first. Otherwise, they may introduce diseases into the tank, causing your mollies to become ill. As a general rule, I recommend separating new fish for three days.

3. Do not add Aggressive Tank Mates

It is best to keep your mollies with tank mates like Guppies, Endlers, or Platies. Rearranging the aquarium can help reduce older fish conflicts if your mollies are new to the tank.

This will cause pre-existing territories to be disrupted, allowing new mollies to find a suitable home in the aquarium without interfering with older fish. If some of your molly’s tank mates are excessively violent, you can either remove them from the tank or separate them with a divider.

Isolate your molly solely because it is constantly clashing with its tank mates. That will not serve you well in the long run. Mollies are also extremely social. They require the company of other fish, and isolation will drive them further underground.

The Bottom Line On Why is my Molly Hiding?

It is important to note that mollies do not always hide when they are scared. They can also be very active and playful in the evening, making them much more comfortable at night than during the day. One reason could be to avoid the light, which would cause them discomfort and stress because they prefer to live in dark waters.

Another possibility is that they will go into hiding when it is unsafe to swim around due to feeding times or other environmental factors.

With that being said, good luck and happy fishkeeping! Molly fish are great to start with if you want to keep your aquarium clean and easy to care for, with little maintenance required. But when it comes to reproduction, there can be some confusion when determining how long molly fish are pregnant and what the stages of pregnancy in molly fish look like. This… The longer I kept mollies in my fish tank, the more often I noticed how the females died after spawning. Because childbirth is a stressful process, I initially dismissed it as a natural occurrence. However, I have seen cases where the females are perfectly capable of surviving after delivery. That’s when I started digging deeper… Despite the fact that we cannot comprehend fish, if you own fish, you can quickly tell when something is wrong with them. In this instance, molly fish is in question. Before I continue, let me ask you a question: Has your molly been swimming vertically? Do they appear to be having trouble swimming? And do… Do you observe that the number of Molly babies is decreasing in your Aquarium or fish tank? Are your Molly babies missing and you are worried about what happened to them? Is it possible that their mother’s Mollies eat the baby mollies? Read this article and I will answer all your questions. Do Mollies Eat…