If you notice your goldfish has protruding eyes, and are worried about the health of your fish, do not worry as you are at the right place. I am going to tell you everything you need to know about the popeye disease in goldfish!

Well, for starters, popeye is not exactly a disease on its own, rather, it is a symptom or some sign of a disease. So, as you can imagine, popeye’s disease has different reasons.

The most apparent sign of this disease is the protruding eyes. In some cases, popeye disease can prove to be fatal, but that is rare and fortunately, it is easily identifiable as a result and can be treated on time.

Causes of Popeye In Guppies

1. Injuries: First and foremost, injuries. If your fish tank is a community tank, meaning your tank has more than one goldfish in it, chances are the popeye is just a result of a physical injury your goldfish got.

The main thing that distinguishes this from any bacterial or parasitical infection is that the pop eye resulting from injuries is usually only present in one eye. So if you notice that only one of the eyes of your fish is swollen or bloated, it is highly likely that it was caused by a physical injury.

There are several reasons for your goldfish to get injured, firstly, goldfish are somewhat territorial creatures, which often results in clashes with other goldfish. These clashes might result in injuries that protrude from the eyes of the fish.

Another reason can be any sharp ornaments in your fish tank that might have scrapped its eye against something, anything sharp or rough can harm the fish, causing one (or both) eyes to swell and protrude.

Bacterial Or Parasitical Infection: Another possible reason for pop eye in goldfish is bacterial or parasitical infection. This is particularly dangerous because bacterial diseases and parasitical infestations are usually highly contagious and can spread in the fish tank if not taken care of quickly.

Taking care of this is important due to the fact that these infections worsen over time if not taken care of.

Poor Water Conditions: Having poor water conditions can also lead to a pop eye infection. As the dirtier the water gets, the denser it gets and it becomes a breeding ground for different diseases. These diseases can cause infections that cause the protruding of the eyes of your goldfish. Dirty fish tank water is also rich in ammonia, which weakens the immune system of the fish, making it vulnerable to diseases that might cause popeye.

Underlying Diseases: The toughest of them all to diagnose, popeye can be a symptom of any inside disease, making it very difficult for you, or even the vets, to diagnose it.

Unfortunately, if you realize that the popeye is caused by internal diseases, most of the damage inside the body is done, you should take out the fish from the water and either euthanize it or try to treat it.

Symptoms Of Popeye In Goldfish

Fortunately, identifying this disorder is very easy, that is if you pay regular attention to the fish in your fish tank, which you should, otherwise, it develops gradually so you might notice it once the damage has been done.

However, although noticing the pop eye in goldfish is a piece of cake, identifying what caused this phenomenon to happen is something that you should be concerned about, as I told you above, different causes of the pop eye have different treatments.

The symptoms are easy to spot and you can not really mistake them for anything else.

Bulging Of Both Or One Eye: First and foremost, the most obvious one, the eyes will swell up and increase in size, although this will happen subtly, so you should take note of your fish every day if you begin noticing slight protruding in you should immediately remove it from the fish tank and treat it. Also keep testing the water for pH levels etcetera, as that will make it easier for you to identify the cause of popeye.

Protruding Of Both Or One Eye: This is the next stage that makes this disorder very obvious, both or one eye of your goldfish starts protruding and it gets to the point where it looks like it’s going to pop off.

Along with protruding eyes, sometimes you can also see stains of blood in the eyes of the fish’s affected eye. Bloodstains are usually caused by extreme swelling, the eye gets so big that it starts puncturing holes into it, causing bloodstains to appear.

Eye Falling Out Of Its Socket: This is the final stage of the popeye disorder when the eye gets so big that it literally can not fit inside the eye socket anymore.

This happens when the pressure from the fluids inside your tank increases to a point that it pops off. There is very little that can be done about this disease if it gets to that point.

Other Minor Symptoms: Other minor symptoms are the typical symptoms of any other disease. Like laziness and lethargy, when the fish are sick, they are too weak to get up and move etcetera, which results in them skipping meals and not being active.

Secondly, loss of appetite, when fishes are too weak to do anything, they tend to hide out and skip meals to avoid getting bullies etcetera. This not only makes them weaker but also makes them more vulnerable to attacks from other fish, which increases the chances of injuries.

Now that you have identified the cause of pop eye syndrome, it is time to treat it. But before I get to the treatments, I would urge you to visit an aquatic vet that confirms what happened to the fish. This will eliminate the chances of wrongly diagnosing what happened to your fish as wrong treatments can worsen the situation too, instead of helping it.

Treatments For Popeye Caused By Injuries

If popeye is caused by injuries, it will heal over time on its own, however, if your fish is in a community tank, you might need to give it an Epson salt bath. This is due to the fact that stress caused by bullying other fish can worsen the situation. And can multiply the damage.

Treating this is pretty straightforward. If you notice that there are more than one fishes in your fish tank that are suffering from popeye, remove those immediately and place them in a quarantine fish tank. dirty water does not cause pop eye disorder but it provides a breeding ground for bacteria to reproduce and infect the fish.

After quarantining the sick fish, and treating them with antibiotics, you can consult your vet for the best antibiotics available for your fish. Most probably, the vet is going to recommend food that induces antibiotics.

It might also be necessary to give antibiotics to the fish in the main fish tank too to avoid the spreading of this disease, just in case.

How To Prevent Popeye?

Preventing diseases or conditions is always better than curing them, and bacterial diseases that might cause eye pop (like dropsy) can easily be prevented. However, since eye pop in itself is not a disease, there is not one single measure that can be taken to avoid it, your best bet is to avoid diseases that cause eye pop.

High-Quality Diet: Goldfish are omnivores, which means that they require a diet of both meat and vegetable. A poor diet does not necessarily mean underfeeding your fish, it can mean that the diet that you are providing does not have enough nutrition for your fish to be healthy.

You can order nutrient-rich flakes from amazon or any other online pet store, or a physical one too, I would also recommend tossing ringworm in there every once in a while, since the fish love it and it is healthy and rich in nutrients.

Maintain Clean Water Parameters: Clean water parameters will ensure a healthy life for your fish. As dirty water breeds many different diseases and can make the water ammonia-rich (as I have mentioned above) you should also monitor the pH and nitrate levels of your fish tank, to ensure the healthiest environment for your goldfish.

Keep An Eye On Your Fish: Keeping an eye on your fish regularly will make it easier for you to identify any problems with them. You should spend about one hour every day with your fish and assist the fish that need your help. Since the pop eye takes some time to develop, keeping an eye out on them will make it easily identifiable, so the other fishes don’t catch it (if bacterial)

Changing The Water: Regularly changing the fish tank’s water will also help prevent pop eye in fish. I am not asking you to fully clean your fish tank every day; but rather, change 30 percent of the water every week. Doing so will reduce ammonia buildup and will also get rid of some harmful bacteria or parasites.

The Bottom Line On Popeye In Goldfish

In conclusion, eye pop is not a disease in itself, rather, it is a symptom of many other diseases. Popeye is not contagious, however the diseases that might cause it may be contagious.

There are a lot of different ways to treat this disorder, however, one tough thing that you are going to have to do is identify what caused pop eye, which can be difficult, but if you notice only one eye is protruding from only one fish, it is caused by injuries and if you notice both eyes are protruding, are there are several other fishes around with the same condition, it is caused by bacteria. And might require different treatments.

Finally, as I always say, preventing the disease from happening is always better than curing it. There are several measures that can be taken to avoid pop eye disorder, the main crux of which is a healthy environment. All in all, it is a curable condition if identified on time. good luck with it!! 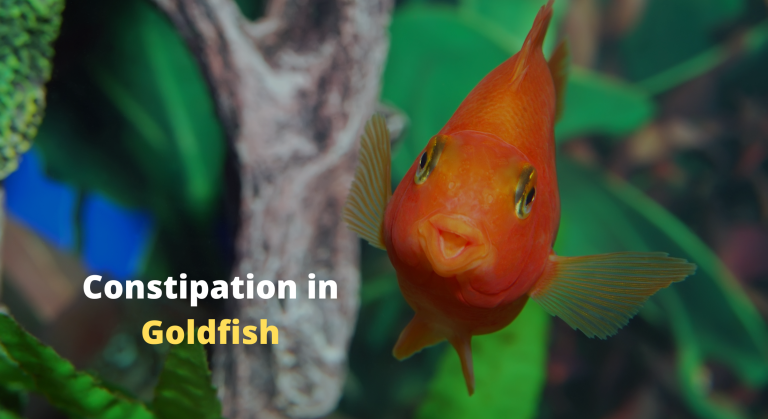 If your fish has not been eating properly for a few days, and you are worried about what is wrong with it. If your fish has been acting like that, there are chances that your goldfish is constipated. However, do not worry as I am going to tell you everything you need to know about… When your betta’s fins appear ragged or discolored, what should you do? But, more significantly, why is it developing in the first place? This might hint that your betta has fin rot. Although this sickness may appear to be distressing, there is no need to be concerned because it is simply treatable. A bacterial attack… Have you noticed your betta is swelling up? Giving up on its appetite? Or, has been facing difficulty in swimming? Well, in that case, you should examine your fish to check if it has been affected by dropsy. And if so, start your treatment right away as you don’t want to make it worse off…. Have you been noticing something weird about your guppy fish’s appearance lately? Perhaps a bent spine? a bloated belly? Pinecone-like scales? If so, It is likely that your guppy fish is suffering from dropsy. Dropsy is a dangerous disease that can prove to be fatal. Unfortunately, the chances of survival of your guppies suffering from…